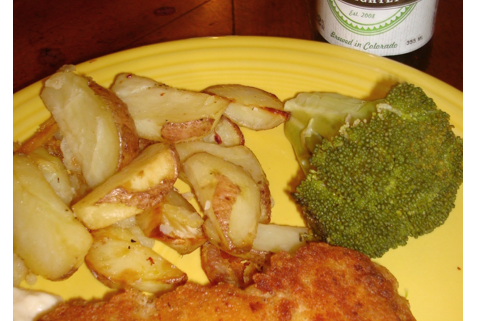 So after searching around a bit I decided to use this adapted recipe from COOKS.COM.

It took a while to fry each of the pieces individually so it helps to have a low heat oven to keep the fish warm. We used Grapeseed Oil as it has a high flash point and good fats. We served it with red potato “chips” and some over cooked broccoli (appropriately British). The taste was subtle but enjoyable. Pedro commented he hadn’t had breaded fish in probably 10 years. We did use Atlantic Cod which turned out to be quite expensive (over $14.00/lb) but amazingly light and flaky. Most interesting was the fish tasted even better the next day cold!

Which brought up a question of why use beer in batter in the first place? We guessed that it might have to do with the British traveling to their colonies and using beer for cooking because it was safer than water. A search on Wikipedia instructs:

UK chippies traditionally use a simple water and flour batter, adding a little bicarb soda (baking soda) and a little vinegar to create lightness as they create bubbles in the batter. Other recipes may use beer or milk batter, where these liquids substitute for water. The carbon dioxide in the beer lends a lighter texture to the batter, and also an orange color. A simple beer batter might consist of a 2:3 ratio of flour to beer by volume. The type of beer makes the batter taste different: some prefer lager whereas others use stout and bitter. In all cases, the alcohol itself is cooked off, so little or none remains in the finished product.

Given that  Tread Lightly Ale is a light tasting beer, that is probably the reason for our subtle tasting beer batter. Next time we hopefully will have our hoppier beer available and I will give it a try. Have you tried a gluten-free beer batter recipe?  What is your favorite recipe to cook with using beer?