Pop quiz, folks! What do the following states have in common? (No, you do not need to answer in the form of a question, either).

Yes. They all have people. And flora and fauna.

Yes. They all contain the letter “A.” But that’s not it (even though that’s kind of cool).

All of these states are now receiving distribution of delicious, gluten-free and crafted to remove gluten New Planet beers!

You read that correctly. 2019 is shaping up to be an incredible year not just for us here at New Planet, but for all of our fans in the aforementioned states.

For years, we’ve proudly brewed and sold our beer in our home state of Colorado. Given Colorado’s proclivity for tourism and visitors from all over the country, one common theme we’re always hearing is, “When are you going to come to my state?!” And every time we had to say “We’re not sure yet!” it would break our hearts as much as it broke yours. Slowly but surely, we’re having to say that phrase less and less thanks to this increase in distribution!

As 2019 starts with a bang, we’re thrilled to say that you can now enjoy one of New Planet’s beers in 9 US states. NINE! And while we would love to be wherever you are, we’ve always focused on making sure that the beer in your glass is as fresh as it can be.

So, as we continue to make inroads and build relationships across these new partner states, we’re working tirelessly to ensure that every beer–whether it’s your first New Planet experience or your umpteenth experience with us–is as fresh and delicious as it is meant to be.

If you’re unfamiliar with New Planet and our beers, we’d love to take this opportunity to tell you a bit more about ourselves!

It all started nearly 10 years ago (is it really that long ago??) when our Founder, Pedro Gonzalez, was diagnosed Celiac. The intrepid outdoorsman and craft beer-lover thought his days of enjoying a cold one after rigorous hike were over.

Thankfully for him (and us), though, he made it a personal mission to start making the beers he loved, just without the gluten. What started out as a curiosity and a hobby quickly turned into something much greater than a Celiac homebrewer making beer in his kitchen!

As Pedro started talking with more and more people who were Celiac or had a gluten sensitivity, he realized he wasn’t the only one who had missed the feeling that comes with enjoying a cold one with friends and family.

After recipe tweaks and countless taste-testing, New Planet Beer was born. Since then, we’ve been crafting incredible beers that are both gluten-free and crafted to remove gluten.

Over the years, we’ve been humbled and inspired by the many stories our customers share with us. Our beers have been on some of the nation’s tallest summits, accompanied our friends on whitewater rafting trips, served as supporting players in the toasts and celebrations of the lives of our customers.

Now that New Planet Beer is sold in more states around the country, we’re thrilled to be part of your life, too. We have a lot of exciting developments happening in 2019, so stay tuned! Please check out our Beer Locator to search for locations near you.

In the meantime, wishing you a wonderful New Year and cheers to 2019!

This past weekend we had the privilege of pouring New Planet Beers at the Niwot Oktoberfest. For those of you who have never heard of it, Niwot is a small town just northeast of the New Planet headquarters in Boulder, Colorado. Each year, the local Rotary Club hosts the Oktoberfest event, and despite sporadic bad weather, we had a great turnout!

We had a blast pouring Tread Lightly, Seclusion IPA, and our Blonde Ale. As is pretty typical anytime we’re pouring our beers at cultural events or beer festivals, we were the only brewery pour gluten-free and gluten-reduced beers. People are always curious to try the beers, especially those folks who don’t have a gluten allergy or sensitivity. The main thing we hear is, “I’ve gotta try this…there’s no way it can taste like ‘real’ beer!”

After that first sip, they look at us incredulously. “Holy cow!” Is a pretty common refrain.

But, I digress! In the spirit of a successful Oktoberfest event, we thought we’d explore this very German holiday in more detail. So, crack a beer, settle in, and let’s talk Oktoberfest!

Oktoberfest really began in 1810, in Munich, Germany. The first celebration was actually a gathering to celebrate the marriage of the Bavarian Crown Prince, Louis (who would later become King Louis I of Bavaria) to Princess Therese von Sachsen-Hildburghausen. The celebration was held in the fields, later named Theresienwiese (ie “Therese’s Fields”) and the royal family held horse races at the end of the event. The horse races were held around all Bavaria that year, though the royal family was present at the Munich events with Munich citizens.

The first party was such a hit that they decided to repeat the horse races again in 1811. 1811 also heralded the introduction of an Agricultural Fair at Oktoberfest, meant as a boon to the region’s agricultural contributions. By this time, a few enterprising Münchner (Munich citizens) set up beer stands at the festival, and the idea caught on in subsequent years.

Finally, in 1896 the now-iconic first beer tents and beer halls replaced the beer stands, and the rest is history.

Nearly 200 years later, Oktoberfest lives on in cities across the world, though the Munich Oktoberfest is still the largest, attracting over 6 millions visitors from around the world annually.

Each Oktoberfest is a bit different, but many of the cornerstones of those first celebrations can be found in even the smallest Oktoberfest event. Games and events for kids of all ages are still prominent in today’s celebrations, while the horse racing is largely a historical footnote now. Classic Bavarian music and cultural dress such as lederhosen for men and dirndl for women are prevalent and popular, though by no means required attire.

No matter where you find yourself celebrating Oktoberfest, we encourage you to take it all in. Dress in whatever makes you feel comfortable, dance to some traditional polka, grab a liter of bier, and toast to this most awesome holiday! As always, please drink responsibly, and next time you fill your bierstein with beer, reach for a New Planet Beer! 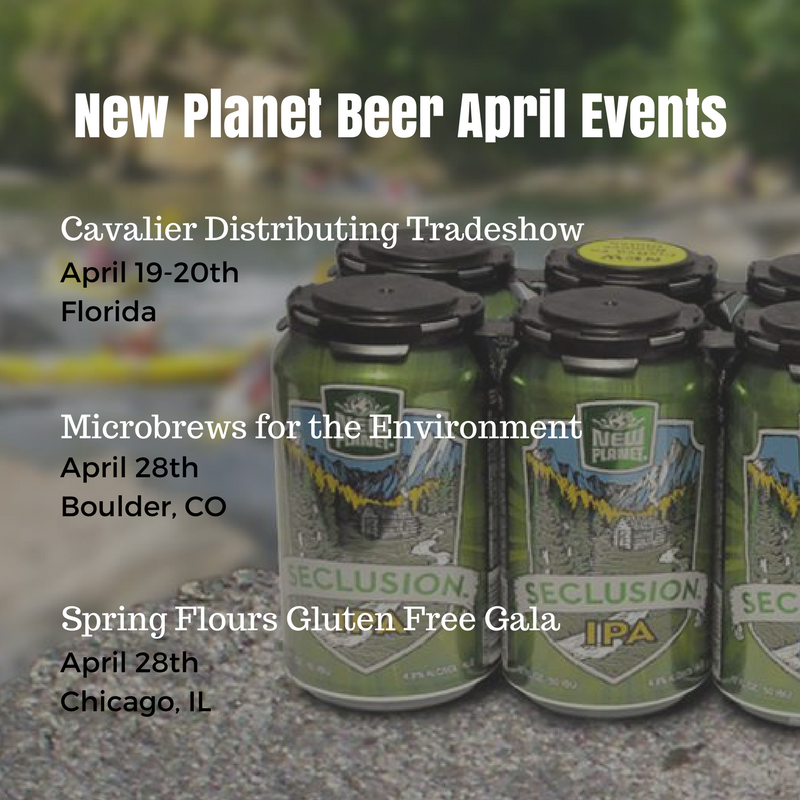 Microbrews for the Environment

Starting July 26th, 2013, New Planet Beer will be offering limited tasting hours at our Boulder Brewery. We will be offering small samples of all of our styles, and some limited release beers as well. Gluten-Free Beer Education is our goal, and great tasting beer is our medium!

Entrance & parking on West Side of Building.

The tasting room will also be available for small private functions and events.

Due to increased demand for great tasting gluten-free beer, New Planet Beer has been busy expanding to new states!

As of the end of May, we were selling beer in 8 states: Arizona, Colorado, Idaho, Kansas, New Mexico, Oklahoma, Utah, and Wyoming. And… This June we’ll be selling beer in 4 more states: California, Florida, North Dakota, and Nebraska. We’ll continue this expansion with the plan to sell our beer in a total of 20 states by the end of the year. If we’re still not in your state by the end of the year, we’ll be working hard to distribute there in the near future!

To locate New Planet Beer in one of the 8 states, visit our Beer Locator.