See how David Roche, a competitive triathlete, discovered his intolerance to gluten, maintained his competitive edge and celebrated with New Planet Beer.

It was Christmas. Or, if not the 25th, it was around that time in late December when walking into a department store would lead to post-traumatic stress disorder if anyone ever had a bad experience with silver bells. There was a 10km race that morning–I don’t remember the details anymore. Anyway, I was fortunate enough to win–but what happened next is why that day changed my life. Stomach pains became progressively worse until, incapacitated by pain, a friend took me to the hospital.

Three months later, I was getting weaker every day. After the Christmas Celiac diagnosis, my weight was dropping rapidly—and not in a good, yellow polka-dot bikini type of way. No, it was getting to the point that the slightest gust of wind had me doing impressions of the cow in Twister. At the first race back, I had nothing–no strength, no motivation, no energy. So I DNF’d. I always say life is amazing, but those three months made me question that. I was withering away, physically and mentally.

That was the spring of my junior year at college in New York City. The education was worth a bit of suffering, but I hated Manhattan. It was so impersonal. Why did no one ever smile!? With the big-city resentment fresh on my mind, and still struggling after learning I needed to be gluten-free, I traveled out to Boulder for research that summer. Stepping foot in Colorado for the first time, it was as if a light bulb suddenly illuminated. Everything changed. The people were uniquely awesome; the environment was a priority; and gluten-free was a healthy lifestyle choice embraced by the community.

Over the next few months, I learned how to be a gluten-free athlete. On my first long training run, two top-level triathletes told me the secrets–then, in an awesome tradition that epitomizes Boulder, we continued the conversation over rounds of New Planet Beer. Below is an attempt to paraphrase their wisdom:

1. Nuts and fruit provide great energy that you can munch on all day.

Speaking of nuts, I bet this beer would go great with some almonds. New Planet Beer is crisp, with a subtle sweetness that sets it apart from anything I had before going gluten-free

2. Don’t shy away from healthy carbs. Before workouts, cereal like Nature’s Path Peanut Butter Panda Puffs or Mesa Sunrise provide delicious energy. Multiple Ironman winners have a pre-race meal of gluten-free cereal. At the same time, reward yourself with potato chips, or chocolate.

What about beer? That’s a good reward, right? Because New Planet Beer is probably the most awesome drink I’ve ever had. They are an environmentally friendly company too, so I can justify a few more as part of my duty as an environmental scientist.

3. Protein and good fats should be the staples of your diet. Salmon, tuna, and free-range chicken are great; if you are a vegetarian, eggs are a great option, along with a whey protein supplement. Don’t shy away from olive oil, and cook for yourself! Make sweet-potato fries by tossing them with oil/spices. Make a delicious stir-fry with tons of veggies, rice, and eggs–add some flax for a nutty flavor.

Most of all, experiment.

Moving on to law school this year, back on the east coast, it is clear how important the last 2 summers in Boulder were to me as a person. I learned how to be a successful gluten-free athlete, sure, but meeting amazing friends over a few New Planet Beers was even more meaningful. Now, I know that I want to use my education to make a positive difference in the future of the natural world. Hopefully I can go back to Boulder for good at some point, but either way, I owe everything to my time on the trails, in the lab, and yes, in the bars, of Colorado. 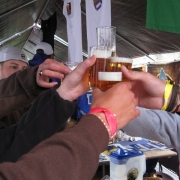 Educating the Servers, One at a Time New Planet Beer at the Denver Brew Fest
Scroll to top
Are you 21 or older? This website requires you to be 21 years of age or older. Please verify your age to view the content, or click "Exit" to leave.